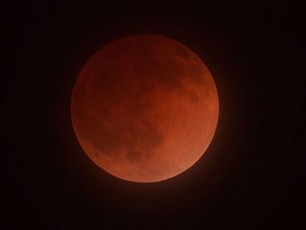 Pastor Mark Biltz of El Shaddai Ministries in Puyallup, Washington click here has been sharing with us some remarkable discoveries on the blood-red moon and Jewish feast connections in the past three months. He now has some new discoveries.

I have known Mark for four years and have spoken at his church twice in the Tacoma, Washington, area. He has been an avid student and teacher of the Jewish Feasts and their awe-inspiring connections to the Lord's earthly events.

Mark said he had found my blood-red moon work interesting and began looking into possible connection to past and future Jewish Feasts at which time he found very significant connections.
I have provided blood-red moon information, and information on the coming total solar eclipses of 2008, 2009 and 2010—which all fall on the 1st of Av.

Seven back-to-back, blood-red moons have fallen on the first day of Passover and Sukkot, with the eighth time coming in 2014 and 2015

Mark found that we have had blood-red moons on the first day of Passover and the first day of Sukkot on back-to-back years seven times since 1 A.D. Three of these occurrences were connected to 1492 (the final year of the Spanish Inquisition), 1948 (statehood for Israel and the War of Independence), and 1967 (the Six-Day War) — some of the most significant days in Jewish history.
The others were in 162/163 A.D., 795/796 A.D., 842/843 A.D. and 860/861 A.D. We don’t have any historical connections for these years at this time, but we do know of significant Jewish persecution during the eighth and ninth centuries.

In all eight examples, the eclipses have fallen or will fall on the first day of Passover and Sukkot.
The eighth occurrence of back-to-back, blood-red moons will be in 2014–2015.

So what does the period of time from 2013 to 2015 portend for Israel and the world?
We will closely watch the peace efforts in Israel in 2008 to see if a peace deal is signed — knowing that 2015 would be seven years later. I am not date-setting, and I certainly won’t speculate, but the lineup of occurrences is very intriguing.

Additionally, Mark has discovered through NASA that there will be three annual solar eclipses on the 1st of Av, beginning this year and running through 2010. We know that the month of Av — and especially the 9th of Av — has been the most trying period throughout history for the Jewish people.
Total solar eclipses have been a bad omen for the nations, while blood-red moons have been a bad omen for the Jewish people and Israel.

Lunar eclipses — click here
Solar eclipses — click here.
Jewish Feast dates: 1998 to 2017 click here.
Month of Av information — click here.
---
Three sets of blood-red moons that corresponded to significant events:
The Spanish Inquisition final year 1492 when the Alhambra Decree ordered all remaining Jews who would not convert to Christianity to leave Spain, the 1948 War of Independence and the 1967 Six-Day War had back-to-back, blood-red moons occur on the first day of Passover and Sukkot the following two years or beginning the same year of the 1967 Six-Day War for two years.

During this year's Feb. 21 "blood-red" moon, Israeli Defense Minister Ehud Barak and IDF Chief of Staff Gabi Ashkenazi spoke of preparation for war with Hezbollah and Hamas, and both those terror organizations leaders were bold in their rhetoric against Israel in this time of great tension.

The Temple Mount and blood-red moons

Previously, I wrote about the Temple Mount in Jerusalem and the two connections to peace talks and the blood-red moons of July 16, 2000, and Aug. 28, 2007.

The Blood-Red Moon, the Temple Mount and the Bible

Mark says that during this century, the only string of four consecutive blood moons that coincide with God's holy days of Passover in the spring and the autumn's Feast of Tabernacles (also called Sukkoth) occur in 2014 and 2015 on today's Gregorian calendar.

The Month of Av Disaster and Consolation

The Month of Av Disaster and Consolation - click here.

By every measure the Jewish month of Av is tragically unique, one in which the worst disasters in our history took place.

The 15th of Av was a time of joy. In ancient times it was a day in which marriages were arranged and new beginnings celebrated. It was a time in which we began again, expressing not just who we don't want to be but who we can be.

Aaron died on the first day of Av (in the year 2447). He was 122 years old when he died, being three years older than Moses.

The entire people of Israel, both men and women, mourned the death of Aaron for 30 days. Everybody knew Aaron as a great lover of peace, who brought love and harmony among people and in many a home.

Tisha b'Av will occur on the following days on the Gregorian calendar:

Mark prepared the following chart that shows the years 2014 to 2015. 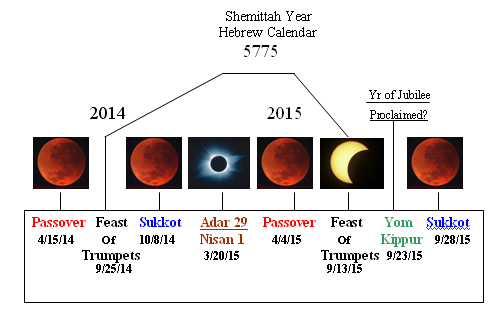 This is interesting work and observations posted only for the benefit of others seeking biblical truth.  It is not my opinion that these connections concerning the eclipse of the Moon has anything to do with the Blood Moon mentioned in Revelation 6:12 -- even Bill Koenig nor Pastor Mark try to make this a solid connection, but others do and have.  The problem with calling these building up to eclipses of the Moon, Blood Moons, is an attempt at connecting the Blood Moon mentioned in Revelation 6 and by our Messiah in Mathew 24.  The problem with making such a connections is that we humans tend to lose interest when these events come and go and nothing happens, and these blood moons, so called have been coming and going.  When we see the real Blood Moon of Rev 6:12 there will be other heavenly signs, or events, along with it and when these events are witnessed mankind will be so afraid some will hide in terror.  And when these Heavenly signs do appear there is another event that will certain send men running for their live and that is the Great earthquake, the one that sakes the whole earth, literally.  So far not one of these past Blood Moons, as many like to call them, has been associated with any of the other events events mention by our Lord.

(Rev 6:12-14)  When he opened the sixth seal, I looked, and behold, there was a great earthquake, and the sun became black as sackcloth, the full moon became like blood, and the stars of the sky fell to the earth as the fig tree sheds its winter fruit when shaken by a gale.  The sky vanished like a scroll that is being rolled up, and every mountain and island was removed from its place.

You see, before this Biblical Blood Moon there will be a Great Earthquake and after that the Sun will become blackened, as if covered by sackcloth -- then -- and only then do we see the Moon appear the color of Blood.  The Great earthquake will have men and women running from the tsunamis ravaging the coast lines worldwide, waves possibly 800-900 feet high.  People will be so fearful that the words of the prophets of science is coming true -- the world is coming to its inevitable end.  But this will not be the end, but when it does happen, for real, mankind will not be casually talking about the Blood Moons of the sunset or eclipses.  This Blood Moon will come AFTER, not before the Great Earthquake.

The observation and connection with the Lunar eclipses is very interesting but nothing to base a doctrine on and most of all nothing to base Biblical prophecy on.  Read the Biblical prophecy again, the Blood Moon comes AFTER the GREAT earthquake, a worldwide quake that lowers, literally, the mountains and move Islands out of place.  Some try to symbolize all of this to mean big nations and little nations bit in the context, the Blood Moons and the Sun going dark are not symbolic so why should we think the Great earthquake is?