Writing in Ancient times
Q: Cain went to the land of Nod and got his wife there, which really shows that there was other people around other than Adam and Eve, so do you think that they had the knowledge of reading and writing?
A: It seems to me that they would have had some kind of communications, whether is was reading and writing as we know.  The Sumerians, a civilization before Israel and quite advanced used stone or clay tablets and used a system of writing called cuneiform text which, by the way, had only recently, by historical timing, been deciphered.  Turns out the clay tablets of that period, dating some 3300 BC, give or take whomever  you listen to – really, really old civilization this side of the Flood and what they discovered what this "supposed" privative society had schools and were teaching mathematics at the level of our High School Trigonometry classes -- I never got past Algebra.  They were pretty advanced and we would have to assume, being that close to the Flood, that this kind of advanced knowledge would have come with Noah and his sons and their wives from the other side of the Flood.

When Cain left the Garden area for the Land of Nod to the East we read that one of his first acts was to build a city and name that city after his son.  Now, the city may not have been as big as New York, but it is called a "city" not a town, or village.  How is it some young man, coming down from the mountains could build a city without help.  Again, we can assume that the people from whom he got his wife must have helped.  But why?  Perhaps he married the major chieftain’s daughter or perhaps it had something to do with the Mark placed on him by YaHWeH.  It is my assumption that the people saw Cain as a man god and this preserved his life as well as gave him a great deal of influence for from this city of Cain came advances we, in our modern civilizations, are familiar with.  Iron work (industry), musical instruments (the Arts), it is recorded all started with Cain and his building of this city.  Later we see other civilization following this same pattern.  In fact it is my belief the later civilizations, before and after the Flood followed the way of Cain and worked to make a name for them-selves.  In this effort the Name of the true God is cast aside for their own ambitions.

When we look at the ancient societies we see this common thread.  Building projects, Temples, towers, sky-scrapers and the leaders seen as "sons of god", or royal blood with god given rights to rule over others and to make slaves and to take wives as they see fit.  Even the more modern of Empires, the Roman Empire, with its system of democracy, actually a republic, still saw the Caesars (after the first) to be gods, or at the least a "son of god".  The First Caesar, his actual name, was said to have been born by heavenly announcement when a comet streaked across the heavens.

If Cain and his immediate descendants were already smelting Iron and creating musical instruments and the like then we can safely assume they could read and write.  Perhaps not English, after all, it took modern man several decades before they could read cuneiform text of the Sumerians.

Of course the next question would be, "Then Noah must have brought books and other knowledge with him to survive the flood, right?"  This would seem sensible and perhaps one of the libraries dug up at Elba, so very close to Mountain of Ararat and the Euphrates area could have been or is a collection of those books from pre-flood.  Of course no one is looking at that possibility and if it were true then the whole of modern history would have to make adjustments.  It would only seem reasonable, however, to assume this, or that at least the information contained in these tablets, being so close to the Flood, would be the same as information that existed before the flood.  This points to why the discovery of any writings before the flood will never happen -- what happens to dried clay when it comes in contact with water?  So, unless Noah brought something over with him then no books of clay but the knowledge or the base of the knowledge of men before the flood would have come over with Noah and his sons and their wives.  The people coming out of the linage of Noah were anything but stupid and they populated rapidly and began building projects and the flood became a fading memory as they worked feverishly to build an name for themselves on this freshly, redesigned world.

The Book of Enoch is an example of some really stupid thinking.  Some want to claim this Book survived the flood and we have it today.  A book that blames fallen angels for sin and the fall of man.  A book that claims there were "giants", like giant people over 340 feet tall, as tall as the Ark was long, and these giants ran out of things to eat so they began eating men.  This is why YaHWeH flooded the earth.  Nonsense, to be sure, but certain deceived people believing and defending this as truth themselves – believing their own lies.  For one thing the Book of Enoch is a composite of several writings and was put together in modern times.  Some of the fable writings did exist around 200 B C, but none have been found before that and only then in Jewish fabled writings call the Talmud.   The Book of Enoch is a collection of Jewish fables take and mixed with some Christian understanding and writings, blended together and presented as a fantasy that other, much smarter men, have picked up and crowned as coming from God and equal to other books of the Holy Bible.

I only mention the Book of Enoch because your questions leads in that direction.  If the Book of Enoch were truly a book of clay tablets and authored by Enoch then Noah would had to have preserved them aboard the Ark and this would, of course, answer your question in the positive.  The Book of Enoch, then, would have proven men before the flood could read and write.  But we do not need this to prove this,  as mentioned earlier, the evidence of this ability, this talent, so soon after the flood suggests they did, before and after have this skill.  Not only that, but for Cain to have built a city it would have taken some very sharp communications skills and even some engineering skills to accomplish that.
Also, the writings discovered in the earliest of civilizations were all on stone or clay tablets, not paper.  The art of using skins and making paper came later but there is ample proof they used clay in the class rooms of the schools of the Samarian, Babylon and Egyptian.

The following is an example of just such writing.   It is very detailed and exact.  From this sample and time, around 3300 BC, the writing changed over a period of about 2,000 years, as demonstrated by the examples below. 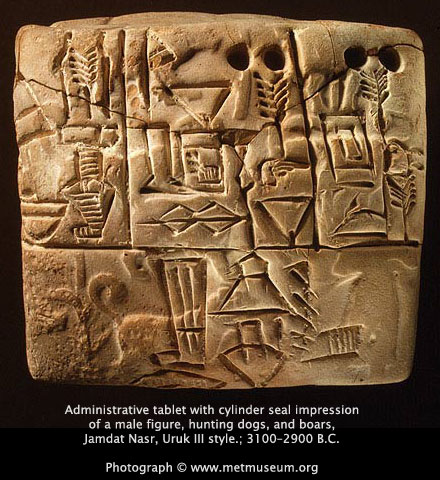 By 2800 BCE the writing system started to exhibit use of phonetic elements. As the Sumerian language had a high number of monosyllabic words, there was a high degree of homophony, meaning that there is a large number of words that sound alike or identical. This presented the possibility of rebus writing, where sign for one word is used to represent another word that has a similar or identical sound. One example is ti "arrow", which is similar to til "life". So, to write "life", the ancient Sumerians wrote the sign for "arrow". Eventually, the logogram for "arrow" became a syllabogram to represent the sound /ti/. Similarly, other logograms also became syllabograms.
You can read more about the previous example at www.metmuseum.org.