Go to content
Q: Isn't it true that there were no camels in Bible times?  I first heard about this while watching Big Bang Theory on television.  So I looked it up online and found out that camels were not in the bible lands when the bible says they were?  How do you explain this?  Doesn't this prove the bible is just made up stuff?
A:  Is this is true!  This is one of those things that critics like to jump on and because so few people, these days, have any real knowledge about the Hebrew/Christian Bible.  But wait a minute, is this criticism an effort to get at the truth or to defame and ridicule?  Who are the critics that point this out?  Considering the source, or sources, they are not Bible students.
Here is a picture of Assyrians using Camels as war animals.  Remember the Assyrians, they were the people that took Isarel captive -- https://www.pinterest.com/pin/651333164829243011/  -- Yes, there were camels in the Middle East and they were used as animals of burden and for war.  Next time consider your source -- Big Bang Theory?  Remember, it is a comedy and their title even warns you -- it is a show about theory, not always facts. But why stop there? 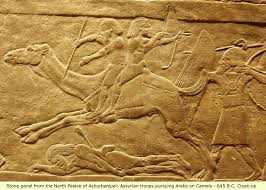