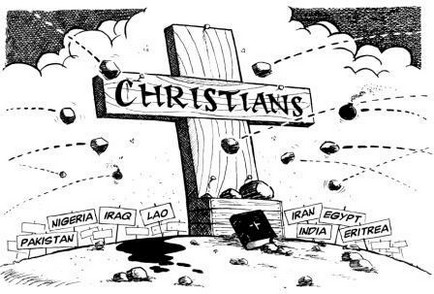 Faith, What is it?
Faith Will He find Faith When He Returns?
dan@servantsofyahshua.com
(Luke 18:8) I tell you that he will avenge them speedily. Nevertheless when the Son of man comes, shall He find faith on the earth?
For the most part the word Faith has a different meaning than the Faith we find in the Christian/Hebrew Bible.  Faith in the world is defined as a trust in one another, expressed as a revived faith in our fellow man, as we witness acts of kindness and heroism during times of disaster.  Faith is also an expression of out trust in our government or leaders.  Faith expressed in a trust that mankind and and will solve our problems and to save us, either from ourselves and others and from plagues and war.  Faith in our scientist to save us from other worldly attacks.  But is this the Faith our Lord is talking about when He asked --
During and after each disaster we hear people saying that their Faith has been restored in mankind as men and women step up to give aid and comfort.  Faith is translated as trust.  This can be applied to the Holy Book we call the Bible containing the writings of the Hebrews and the Christians, but that is not the Faith our Lord questioned when He asked if He would find Faith when He returned.  From a world point of view, the Earth is filled with Faith and examples of Faith.  The word has even become synopsis with religion as to which religion or Faith are you a member.
The world of Faith is in the world, not in a Creator God or a Savior God.  Yes, some have faith in their god to save them or educate them or help them to continue on in life even after death.  But, the Faith the world practices is not the Faith of the Christian Bible or the Jewish/Hebrew Bible.
Faith, as meant in Scripture is to believe God, the God of the Bible, the God of Salvation, the God of all Creation.  Faith is interpreted to mean, or say -- God’s Truth in His Word.  In other words, when you read the word, Faith, read is as to Believe in His Word, His Truth.   It has nothing to do with believing in your fellow man.
Thank you for sharing. I would add only a couple of things. When our Lord YaHshua asked this question, it was in between parable about the Kingdom to come. This remark is seen, in the context, as something of a pondering, as if YaHshua wondered Himself, if things might become so strenuous for the believers who are trying to be patient in awaiting His coming and the establishment of the Kingdom YaHshua is talking about through parable In this word, FAITH, we find a definition in Strong's saying, "Truthfulness of God", and in the New Covenant Writings we find this definition too -- (Heb 11:1) -- Now faith is the substance of things hoped for, the evidence of things not seen. What is evidence of things not seen? His Truth, His truthfulness, His Word already delivered to us.
(Luke 18:8) I tell you that he will avenge them speedily. Nevertheless when the Son of man comes, shall He find faith on the earth?

In Strong's, Faith, as used in that verse is -- Truth of God, or God's Truth, as well as other possible definitions but this one fits the context. Will our Lord find anyone that believes in the Truth of God, His Word, His Promises? Faith, in another place is found defined as a belief in something not yet realized or seen -- a Belief, or, Believing in His coming and the coming of the Kingdom, without evidence, only a Promise, and that is what the Covenants are, Promises, with the New Covenant being the one Promise leading to our Salvation. The question coming from YaHshua, within the context, between the parable teachings truly seems to be a Thinking out loud moment. Truly an look into His subconscious. Remember, our Lord told us that what He was revealing was coming from the Father, the words He spoke He had previous been given or told directly by the Father.

(Rom 3:3) For what if some did not believe? shall their unbelief make the faith of God without effect?

(Rom 4:14) For if they which are of the law be heirs, faith is made void, and the promise made of none effect:

(Rom 5:1) Therefore being justified by faith, we have peace with God through our Lord YaHshua the Anointed:

Our Faith and the question for the days before our Lord returns is about believing His Word as truth even if the thing and things seem impossible. On the one hand, a belief or faith in the fact that our Lord is Raised from the Dead, and that the Word of God is true and trustworthy for now and the future concerning things we have yet to see. Be believe He has told us the truth even though we have not evidence or at least not evidence the world might accept.

This Faith is not about living as a good Christian. It is not about how moral we may be or clean or how many Sabbaths we keep. It is about Believing His Promises, His offered Covenant, our Belief in Him and what He has told us, even though we cannot prove it to anyone, we believe.  This is something we run into all the time. You with your son and daughter. They have a belief system of their own, but do they have faith in the Truth of His Word, the Word of God the Father, do they really believe someone rose from the dead and is promising us life eternal only through and by Him? When He returns will He find people believing what He foretold to be true and then, of course, will be proven upon the Return of our Lord and Savior YaHshua. Reading the Letters to the Churches in Revelation 2 and 3, the very last of the Churches, the Laodicean, we find that they seem to be very spiritual but our Lord is very angry with them. They seem to be in their own minds and while very religious they apparently are not looking or watching, even expecting His Return, as Promised. There is another group as well, that when the things our Lord reveals must happen, even in His parable teachings, there will rise those believers that become scoffers, losing patience and losing faith in His Words and these scoffers, seeing the terrible times and the earth shaking events lose patience saying that things continue on as before, from the beginning of the world to now, nothing changes, there is no resurrection, and not coming, nothing, just the same old thing, or so it seems to them.

Our Lord had good reason to wonder if He would find Faith, a true and continuing belief in the Word of God, a belief in things seemingly impossible. YaHshua could see that the coming of the Kingdom and its delay, or what may appear as a delay -- not according to the time table of men, might cause many to doubt the Word and to lose Faith, even though they profess to being believers they may, in fact, deny the power of His Word and His Promises to keep.

(Gal 3:2) This only would I learn of you, Received you the Spirit by the works of the law, or by the hearing of faith?

How is it the hearing of faith? Going back to Strong's and as previously noted, this is the hearing of God's Truth, or His Word -- believing God's Truth.  Faith, as a definition, as in one's faith, is a belief, an attitude of mind and spirit for believing what you or I are told through and by His Word, even if it cannot be proven. YaHshua said to His disciples once, You believe because you see? Bless are those who have not seen but do believe -- from this springs true Faith.

My difference of opinion is not that the Worker or others who have expressed a similar view are wrong in their teaching, nor that such teaching is not beneficial, but I do have to disagree with applying this remark by our Savior YaHshua as having anything to do with our own righteousness or the rightness of others.  Like the finding people unblemished by this world, as the worker puts it. This cannot be meaning, for without YaHshua it is impossible to please God the Father, and all have failed and come short of His Glory. I know what the Worker means but it is a misplaced righteousness of making oneself white. By the definition of some, the perfect disciple would be so withdrawn from society, avoiding every possible temptation and sinful people, that such would not be seen by anyone, like ascetics of India hiding in caves to keep from sinning and committed to meditation only. The Apostle Paul made this very same argument when somewhere, he said that to avoid this sinful world we would have to leave this world.

Again, I do seem the contrary one. But, I dare not apologize for that. I do hope you read what I have shared in His Love. And I thank you always for inspiring me to look deeper into some passing thoughts and words and in His word, and for sharing so openly with me, your brother in Him.
Peace and safety I pray, Dan
dan@servantsofyahshua.com
Back to content