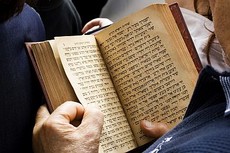 Oh, and remember to read from right to left
Hebrew Language
By your servant, Dan Baxley
Email:  dan@servantsofyahshua.com
www.fogofreligion.com
Keep It Simple Stupid -- as the saying goes -- and -- if the shoe fits?
We have all heard that saying, at one time or another, but today it is not used that often because we have become so sensitive in our lives, not wanting to offend anyone.  Still, for the readers sake I will say that I do not apply the principle, “Keep it simple stupid”, to the reader but to myself.  Hoping I have not offended anyone of a sensitive nature, and I want you to know that this is not going to be a long drawn out study in languages.  It be my goal to “keep it simple”, and if I can understand it I think others will too.
Bottom line?  If you cannot read it, then what good is it?  Do you need to learn Hebrew in order to understand the Bible, the Word?  What does Paul say?

1Co 14:9-10  So it is with you. Unless you speak intelligible words with your tongue, how will anyone know what you are saying? You will just be speaking into the air. Undoubtedly there are all sorts of languages in the world, yet none of them is without meaning.

Modern Hebrew: Modern Hebrew, also called New Hebrew, came about by the work of Eliezer Ben-Yehuda, around the 19th and 20th century. Modern Hebrew along with Modern Arabic is the two official languages of Modern Israel. A New language and many Hebrew bibles are based on and written in this language. So, what if the Hebrew Roots people and other Christians think it is the language of the Bible, the Holy Language?
Why is this important?  Well, for one, our Savior was in a battle over words with the Pharisees of His day.  His continual corrections had to do with what was being said in Scripture and what it meant, but the Pharisees and others of the religious leaders wanted to argue over words and sayings, missing the message, missing the lesson in the words.  Many times the genius of our Savior’s response to their word for word, hard translation of the writings was found in good old “common sense”.   They had made such a religion out of the words they began to worship the words as opposed to what was being said and meant.  By the hard word the Pharisees and the Sadducees, the scribes and elders say the law of hate, and eye for and eye, tooth for tooth, missing the message – to render equally.  But this was taken to mean, literally and eye for an eye and to this day leads some down a path of hate and revenge.  Our Lord makes it plain that their use of the words was wrong and the as people we are to treat others as we would like to be treated.  He did not change the words but the meaning, the original meaning and intent.
Time after time our Lord, YaHshua, made these small and large adjustments, not to the word but to their thinking and in each case they were baffled and could not respond.  They had used the “hard” version of the “word” to control the people, to solidify their positions as leaders.
Agree or Disagree
Some, I am sure, will not agree with this and some will but either way I do hope all will gain from this simple minded look at the Hebrew Language.   I enjoy looking at the Hebrew Dictionary, like Strong’s, and the Word Study Dictionary, for deeper meanings and looking for possible trip ups the translators may have made, but this is not my religions and it will not be until we experience His return and we are given a “pure language” a language which we can use to all call on Him in harmony, as one voice.  What a day that will be, but that day is not today.  First this earth will have to suffer many twists and turns before we will all see that the way of man is not the way.
Peace, Dan
Email: dan@servantsofyahshua.com
Back to content